If you look at the data the general philosophy in the United States seems to be “bigger is better.”  And over the past several decades, Americans have supersized our sodas, our refrigerators, our big-box retailers and ourselves — even our feet have gotten larger.

Here’s a look at a few of the most startling things that have grown in size in the U.S. over the past few decades: 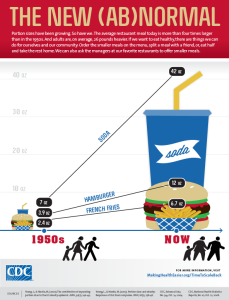 You probably know that portions in the U.S. have been getting bigger — but do you know by how much?

When McDonalds first partnered with Coca-Cola in 1955, the only size of a beverage available was 7 ounces. By 1999, McDonald’s had introduced a drink that was literally six times as large as that — the 42 ounce Super-Size. Today, the largest size that McDonald’s serves in the U.S. is 30 ounces, though many people still get refills.

A similar trend has been at work with our french fries, hamburgers and restaurant meals in general. The Centers for Disease Control and Prevention says that the average restaurant meal today is four times larger than it was in the 1950s. As the graphic below from the CDC shows, the size of the average soda, hamburger and french fries portion has grown substantially since the 1950s. 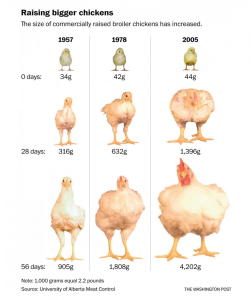 To meet our insatiable demand for white meat, America has begun super-sizing its chickens. As my colleague Roberto Ferdman writes, Americans now eat 80 pounds of chicken per person per year, and we’ve begun breeding bigger and breastier chickens as a result. 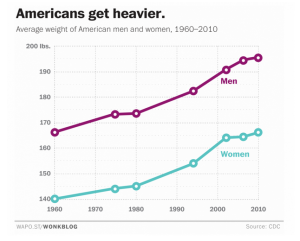 With the size of our food getting so much bigger, it follows pretty naturally that Americans themselves are getting larger.

Men aren’t doing much better. Their average weight has risen 17.6 percent in the same time period to 195.5 pounds today. To make the same comparison, an American man today weighs almost as much as 1.5 American women from the 1960s. 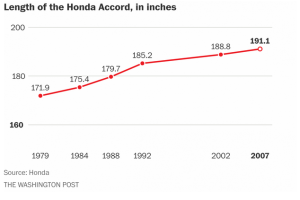 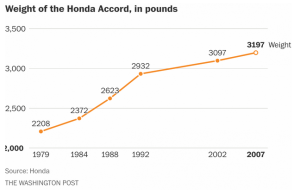 Compared with the gas guzzlers of 1950s, many cars have actually shrunk as time has gone on. Since the energy crisis of the 1970s, however, cheaper fuel prices and expanding waistlines have both encouraged cars and SUVs to once again get bigger. 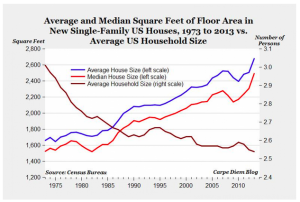 New homes in the U.S. today are about 1,000 square feet larger than they were in 1973, and the living space available per person has doubled over the last 40 years, Mark Perry of the American Enterprise Institute writes, citing data released by the Census Bureau last year.

The average house size in America fell slightly during the Great Recession, but it has once again strongly trended upward in recent years.